You can observe a lot just by watching 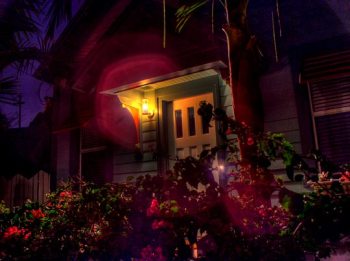 Anyway, tapping into my current random-access memory, I find the following:

When reporters cover hurricanes, they talk a lot about the populace “hunkering down.” Ugh. Since Katrina blew in three years ago, it seems people only “hunker down” in preparation for a storm. They no longer “prepare,” “take cover,” “take shelter,” “cover up,” “brace,” or even “hide.” I don’t claim to be a linguist; I’m only an editor who’s been around more than most of those reporters. To me, “hunker down” has always meant “squat,” period. Both strike me as slangy, phonetically ugly words, denoting an unflattering (certainly unladylike) body position which barely relates to hiding from a storm for many hours. Nobody is going to squat for hours at a time, not even a National League catcher.

Lt. Gen. Russel Honore, such a commanding (literally) figure during the Katrina disaster, doesn’t seem nearly as impressive wearing a suit and tie and sitting behind a news desk. And I bet he’d be a lot more useful out on the streets, too.

The kids went downtown today for the “Taste of Denver” event. I begged off when they invited me to go with them. I’d seen the ads and been really tempted by the thought of all that food, but when it got right down to it, I said no. Four people is about three more than my comfort level, especially when two of them are under 6 years old. It just wears me out. As did the thought of being on my feet and running all over creation for who knows how many hours. I’d love to be one of those spry grandparents who does anything and everything with the kids, has no trouble keeping up with them, and loves every minute of it. You know the type — the “grandparents” (tanned 40-year-old models with silver-dyed hair) you see in TV ads. The reality is, I’ve been so sedentary for about the last five years that the most exercise I get each week is a trip to the supermarket.

Say, just out of curiosity, how many of you out there turn on your porch lights at dusk? How many of you leave them on all night? What about other lights in your house? No, I’m not trying to play environmentalist here. When I was growing up, our front porch light was always on. Mom and Dad seemed to think we should always come home to the warmth and security of some lights. That was their story, anyway. (More than one boyfriend took exception to a 150-watt bulb blazing over the front door … ) Anyway, I grew up in a neighborhood where porch lights glowed at night. Every night, not just on an annual Neighborhood Night Out. And when I came home at whatever hour, I never walked into a dark house. There was always a welcoming light inside somewhere.

So why, now, when I come home after dark, is my street so damned dark? Pitch black. There are pale streetlights at each corner, but otherwise it’s as though every house is empty. Or has WWII blackout drapes in place. I exaggerate only slightly. I do actually play a game now of trying to spot any light other than the streetlights. Only a few explanations come to mind: (a) this is a very environmentally conscious state and nobody uses lightbulbs anymore, (b) all those houses really are empty at night, (c) all the living rooms are on the back of the houses or in the basements, (d) my night vision is even worse than I thought, (e) everyone goes to bed at sundown, or (f) they’re all trying to drive me crazy because I yelled at someone about fireworks.

Honestly, I don’t know what the answer is. To me, lights in the evening are warm and friendly. And more importantly, lights are security (I learned that as a kid, too). I have lights on the front porch, the front of the garage, and the back deck. And they all stay on all night. Maybe it’s not the PC thing to do, but at least they’re all CFLs. Besides, I pay extra for the wind-generated electricity. So humor me. I live alone; I’m insecure. And what idiot would break into a well-lit house when every other house in the neighborhood is totally dark?

Which reminds me, a few weeks ago, just before the DNC hit town, my daughter-in-law and I were talking about the planned demonstrations downtown, and somehow that transitioned into personal safety and then into guns and gun ownership. She had plans to be downtown to take pictures and had seriously considered buying and carrying a gun, before deciding that being caught there with a gun would not be very smart. No shi*t, Shylock! (Grandma biting her tongue here.) The conversation continued, from both of us having owned guns earlier in our lives, to how she could obtain another one for me now for protection at home (her idea, not mine). Okay, I had to agree with her that the sound of a pump-action 12-gauge being cocked would probably scare anyone away, although personally I’d rather have a nice little .38 snub nose tucked in a bedside drawer. The difference between us is that while she’d probably not hesitate to go ahead and use it, I’d probably be shot dead with it (by the intruder) while still debating whether to pull the trigger.

No, we are not anarchists or anything. Remember, we’re both from Oklahoma. We both grew up with guns. Everybody hunts, or used to. I asked for a BB gun for my 12th birthday and instead was given my dad’s reconditioned lever-action, Marlin .22 that he’d had as a boy. I didn’t get to use it much, since we lived nearly downtown and had to drive quite a ways to get to a place isolated enough to safely fire it. You’d better believe, though, I knew every inch of that thing, how to use it, take it apart, clean it, reassemble it. It occurred to me only this week that, of course, I had ammo for it too, on the shelf in my closet. Remarkable. With several kids in the house, my parents trusted a 12-year-old to play for hours in her bedroom with a real gun and live ammunition in reach. What were they thinking!?

Anyway, I loved that rifle. Lever-action! Just like the cowboys on TV used! Lol. I left it behind when I went off to college and lost track of it. Not until years later did I learn it had been given to my younger brother, my parents apparently having forgotten it had been given to me. Luckily my brother hung on to it and when his son was old enough, they used it for target shooting. He still has it at his house up in the mountains and we all cherish it.

That was the first and only time I’ve owned a gun, and I’ve only rarely thought about getting another one. I’ve heard way too many stories of people being killed by their own guns, whether accidentally or intentionally. I’m not afraid of handling them. I’d just rather take my chances without them. Especially with grandkids around now. (I love target shooting, though. Had it not been for a scheduling conflict, I’d have been on the CU rifle team back in … uh … when I was a freshman. Freshwoman? What’s the “correct” term these days?)