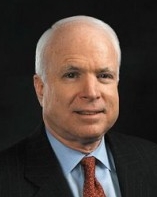 John McCain’s unexpected suspension of his presidential campaign yesterday strikes me as a purely political maneuver, adopted to once again create a distraction or upheaval in a campaign that’s not going his way and, possibly, to get out of a debate that he had concluded would not serve him well. It feels like “cut and run,” as opposed to honoring a commitment. Not at all what I would have hoped for from the senator and a man who would be president.

McCain’s lurching through this campaign season has been distressing to watch. Rather than soldier on with determination to a stated goal, he has misspoken, changed his position, and bounced from one unexpected decision to another, seemingly with no plan or direction at all. Until yesterday he’d expressed no interest in the bailout plan being discussed in Washington. If he was so desperately concerned about the issue, he could have been in Washington. In the meantime, both he and Obama have unlimited resources for following every minute of the discussion while they remain on the campaign trail. They also have the resources for returning to Washington on a moment’s notice if their physical presence is required.

To date, McCain’s campaign has been more a campaign of distraction than of information, of stunts and attention-getting, rather than of substance. I thought he “jumped the shark” when he named Palin as his running mate; I don’t know how to describe this latest move, except maybe desperation.