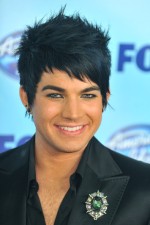 Kris Allen won “American Idol” tonight. Good for him. If you want all the details, check the AP story.

It seems likely that a lot of third-place finisher Danny Gokey’s votes went to Allen. They have similar styles and both are Christians who work in their respective churches. That could have been enough to give Allen the win over season-long favorite, Adam Lambert.

AP, however, carefully avoids mentioning what might have been a big part of the story. Lambert is gay. During the entire Idol season, pictures of him posing in full makeup and kissing another man have circulated on the Internet.

It was never mentioned on the show. Privacy concerns, no doubt, but the people who brought you Carrie Underwood and David Cook probably weren’t too happy about it. Simon Cowell didn’t get stupid rich without knowing a lot about marketing that show.

Lambert is a great performer. He’s got the arrangements, the screams, the theatrics. He arrived at Idol looking like a professional on tour, albeit an overweight one.

Allen came out of the pack, almost overlooked until a few weeks ago. His strength is the quieter, bluesy ballad sort of thing that requires actual singing. To that he adds keyboard and guitar skills and aw-shucks cuteness.

By the time the final voting began, it looked like anyone’s game. A record number of votes poured in. And Allen won.