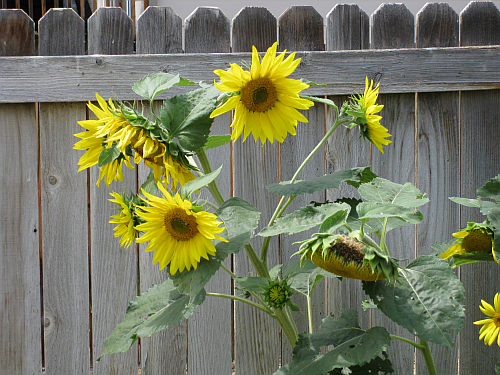 Last spring I hung a couple of pre-formed cylinders of mixed bird seed on my back fence. I wanted to see what species, if any, I could draw into a backyard featuring only grass and river rock mulch. Birds being a resourceful lot, it only took about ten days for them discover the goodies.

A bonus for me, discovered sometime later, was that some of the dropped seed germinated. What sprouted didn’t look like the usual dandelions, so I let it all grow, hoping maybe some of the plants would be sunflowers. And lo, there were sunflowers!

By the time the blossoms were brushing the top of the six-foot fence, the leaves were ratty and chewed by insects. From the house, though, all I saw, and still see, were bright yellow blossoms atop green foliage — where in the past I’ve just had a bare fence.

I’ve learned that sunflower blossoms start out proportioned like daisies or black-eyed Susans. But as they mature, the black centers — the seed heads — expand until the petals are only a narrow yellow fringe. The heads get so heavy, they start to fall over despite their thick, hairy stems. About this time, the birds descend on them and start dining on the seed heads.

The plants are not as pretty now, with the biggest blossoms hanging down, but I’ve enjoyed my little botanical study, and so have the birds. I did start wondering if these particular sunflowers are perennials that might reseed themselves and return next year. Odds are, no. Wikipedia has an interesting article on sunflowers, and apparently only some of them are perennials. And contrary to what I’d always thought, not all of them always turn to face the sun. Another romantic notion smashed. But in its place, a neat explanation of the mathematics of the spiral formations in the seed heads. The math is a bit beyond me; it’s enough for me to see that these fascinating spiral patterns occur naturally and do so because it allows the most efficient packing of seeds into the flower head.

Still puzzling me are the little yellow flowers blooming at the base of the sunflowers. They look like thistle heads that sprout fuzzy yellow topknots. My first guess was niger thistle, but apparently that’s not correct. Guesses, anyone?

Lastly, I couldn’t help thinking that sunflowers = Kansas, and my dog Annie came from Kansas. I hope she appreciates my effort to make her feel more at home here — even if it only attracts birds and squirrels for her to chase. 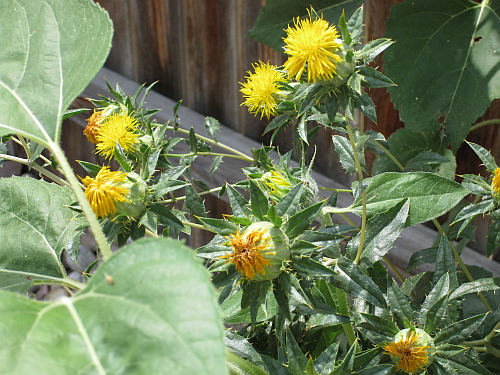 Some kind of thistle?