Obama sells out to Big Pharma 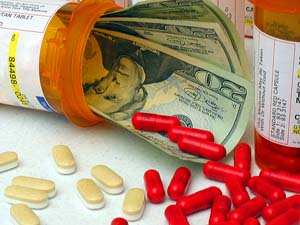 I’d heard about it somewhere a while back. Now Robert Reich has confirmed it wasn’t my imagination.

In an article today on Salon.com, Reich talks about Big Pharma’s secret deal with the White House: In exchange for the industry’s support of his health care plan, Pres. Obama has promised not to use the government’s purchasing power to negotiate lower drug prices.

That, folks, is called a sellout. Obama talks of paying for his plan with cost savings and efficiencies. Yet before any legislation sees the light of day, he secretly gives away one of the largest, most obvious savings opportunities.

George Bush did the same thing when establishing the Medicare drug benefit, and I’ve never forgiven him for it. Government is the only entity with enough clout to negotiate lower prices on drugs — to the very great benefit of millions of people — and this is the second time it has yielded to Big Pharma.

Disgusting. Typical, but disgusting. The legislation we ultimately get will probably be too watered down to accomplish anything — except maybe grant generous stimulus funds to Big Pharma to encourage its wonderful research and development of expensive new miracle drugs to benefit all Americans.