Reporters are a strange lot. They run to places that others run from. They delight in pestering people with annoying or even rude questions. They puff up stories and report them as news even when they aren’t. 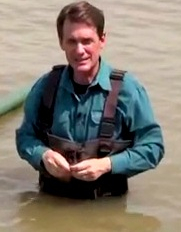 Take this morning for example. Air Force One had to “abort” a landing in Florida. That’s not news. The landing was not “aborted.” The pilot simply took an extra turn around the airport before landing. The same thing happened a few weeks ago. The landing wasn’t “aborted.” The pilot was simply asked to go around once to avoid crowding the plane in front of it. Routine, everyday air traffic management. Not news.

And have you caught the morning segment on CNN where they ask viewers to vote on which of three “news” stories CNN should air? I thought the network’s news editors were supposed to make those decisions, but maybe they take mornings off now. If a story is news, run it. If not, don’t. As for CNN, they ultimately air all three stories anyway.

What really cracks me up is reporters doing the very things they are warning the rest of us against doing. The classic example is the correspondent who struggles to stand up in driving rain and hurricane winds while urging viewers to evacuate the area or stay inside to avoid flying debris, etc. (Love the video of Geraldo Rivera getting swept off a sea wall while doing this.) This week, naturally, they’re all out standing waist deep in Mississippi flood waters to warn us about the depth, current, mud, toxins, raw sewage, snakes, and alligators that make those waters so dangerous.

And for such foolishness, they get paid. Go figure.

For more on silly flood reporting, check out JournalCetera.