Ingress at the Stanley Hotel 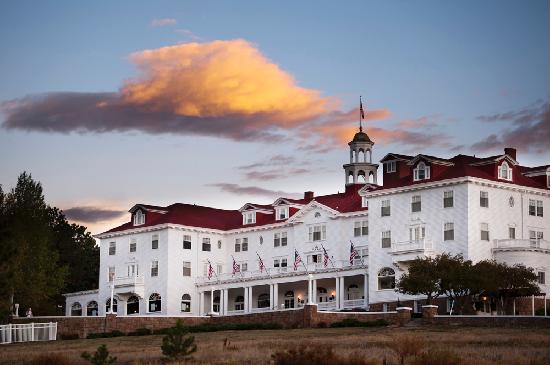 Almost everyone has heard of the Stanley Hotel in Estes Park, Colo, right? It’s where Stephen King was inspired to write The Shining. Old, historic, haunted, yada, yada.

And as it happened, the kids took me to a Mother’s Day brunch in Estes yesterday. It was a gorgeous day, clear blue skies, about 70°, a light breeze, and the peaks, blanketed in heavy April snows, were at their most spectacular.

The most fun part of the day, however, was pure gaming geek bliss. The Son and DIL are playing Ingress, a new worldwide game from Google that’s still in closed beta (play by invitation only). It’s vaguely like electronic geocaching, where you use the GPS on your phone or tablet to find and capture locations designated as  “portals.” There are two sides, or factions — the Enlightened (green, aka “Kermits”) and the Resistance (blue, aka “Smurfs”) — competing for control of portals and the areas between and around them.

Anyway, long story short, the Stanley Hotel is a portal, and when we arrived in Estes yesterday, it belonged to the Resistance, the other guys. Combining their resources, The Son and DIL attacked and captured the portal for “our” side, the Enlightened. Yay!!!! Three adults and two kids doing a victory dance in the middle of the Mother’s Day crowd on the Stanley Hotel’s front lawn. I’m sure people thought we were crazy.

I don’t know if I’d get out and about enough to play, but I’m sort of hoping The Son, when he returns from Google I/O at the end of the week, will have some Ingress invites to distribute … (but only to people willing to play as Kermits).

Hmm, I wonder if this official Ingress logo means the game favors the Resistance …

"The ignorance of one voter in a democracy impairs the security of all." ~ John F. Kennedy Cancel reply