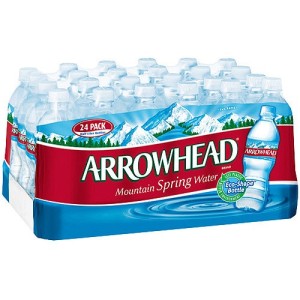 Bottled water. It’s everywhere. And an interesting issue has arisen in California, where statewide water rationing has just been made mandatory because of a brutal four-year drought. Petitions are circulating demanding that Nestlé Waters stop bottling California water and selling it out of state.

Understandably defensive, Nestlé says it does nothing harmful in the watersheds where it operates. Reuters describes Nestlé’s operation:

The Swiss firm drew 50 million gallons from Sacramento sources last year, less than half a percent of the Sacramento Suburban Water District’s total production. It amounts to about 12 percent of residential water use, though, and is just shy of how much water flows from home faucets in the United States, according to the U.S. Environmental Protection Agency. In other words, Nestlé may be bottling more than locals drink from the tap.

Nestlé owns Arrowhead Mountain Spring Water which has been bottling water from Millard Canyon, Calif., for a decade. The plant is located on the Morongo Band of Mission Indians reservation which, Nestlé claims, exempts it from California’s state water rationing.

Last year RT.com explained the impact of the operation:

The reservation is located in a Mojave Desert oasis at the base of the San Bernardino Mountains, 85 miles east of Los Angeles. Drawing water from that location, where just three inches of rain falls each year, prevents water from seeping downhill to fill aquifers of nearby towns struggling for water during the drought.

The Morongo did file a report with California that said 598 acre-feet of groundwater was pumped in Millard Canyon in 2013, and three acre-feet were diverted. “Those amounts translate to about 200 million gallons a year — enough water for about 400 typical homes in the Coachella Valley,”The Desert Sun reported.

It’s bad enough that scarce California water is being sold out of state, but even worse that Nestlé buys the water cheap and sells it elsewhere for a tidy profit. Not that it matters what they pay for it. The folks in California can’t drink dollar bills. They need the water.

I’ve been critical for years of the amount of bottled water that people seem compelled to buy and carry with them all the time. How and when did that come about? We used to go through life just fine without everyone packing a bottle of water (plastic bottles which in many cases probably don’t even get recycled). Why pay for bottled water when water flows from every tap in the country? If you must carry water, buy a reusable bottle and fill it with tap water. Are 21st Century people really so dehydrated? Is 21st Century tap water really so undrinkable?

Water rationing and the drought are going to be costly for everyone. Landscaping will die. Water recreation will be cut back. Golf courses will turn brown. Swimming pools will be drained.