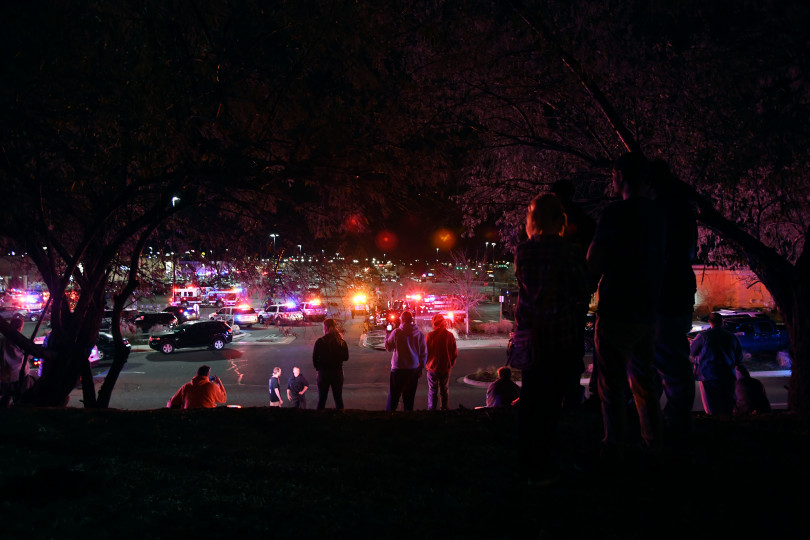 Friends and relatives await word about their loved ones in the store. (Photo by John Leyba/The Denver Post)

By now you may have heard about the Walmart shooting here in Thornton, CO, Wednesday evening. And one or two of you might even have remembered I live here. But that particular Walmart is six miles away, so I wasn’t terribly alarmed … except that the gunman got away and it took police five hours to finally identify him on surveillance video. He wasn’t located and arrested until the next morning.

Why did the identification take so long? Because a number of shoppers pulled their own guns. It took police five hours to figure out which gun-wielding individual was the shooter.

So much for the NRA dictum: “The only thing that stops a bad guy with a gun is a good guy with a gun.” Not one of those “good guys” on the scene fired a shot. All they managed to do was delay the identification of the long-gone shooter. (And if they had started shooting — in a crowded Walmart at 6 pm — imagine the chaos. How would they have known who to shoot? Would they have ended up shooting each other?)

Three people were shot and killed. It’s a wonder more didn’t die. And given the NRA’s obstruction and Congress’s complicity, I expect this to be a common occurrence during the remainder of my life. I take no comfort in the fact that by definition this was not a “mass shooting” because fewer than four people were shot.