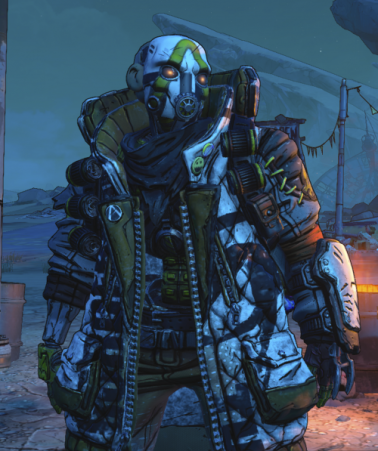 This is FL4K, my BL3 character as he currently exists. Not sure if he’s a robot or a cyborg but he has pets, and that’s all I care about. There are three other playable characters available and I expect to try them all eventually.

Lest anyone think otherwise, I’m still an avid video gamer, even at 76 and change. I spent the entire summer engrossed in Assassin’s Creed: Odyssey. It’s basically a role-playing game set in ancient Greece. The game gives you the option of playing as Alexios or as his sister Kassandra. I opted for Kassandra and finished the main storyline. There was a lot of material added later (DLC, downloadable content) and I played through quite a bit of it while waiting for the release of Borderlands 3 about a month ago.

So now I’m deep into BL3 and really enjoying it. It’s been many years since BL2, the last iteration I played, and it’s fun being back in it. I confess, however, that I now sometimes resort to Easy mode instead of Normal. Some of those bosses are just beyond my aging reflexes. (And, rarely, if all else fails, rather than just give up on a game that I paid good money for, I ask my grandson to play me through a boss fight that proved impossible for me. That’s happened maybe twice this year, and only after I’d failed dozens of times. It’s a matter of personal pride to get through it by myself. I can’t say I beat a game if someone helped me.)