I just took the political spectrum quiz at Go to Quiz and these are my results. I think it’s safe to call me a centrist, don’t you?

Compared to the millions in the world who have taken the quiz, this is how I fared:

I took the same quiz back in 2011 and these were the results: 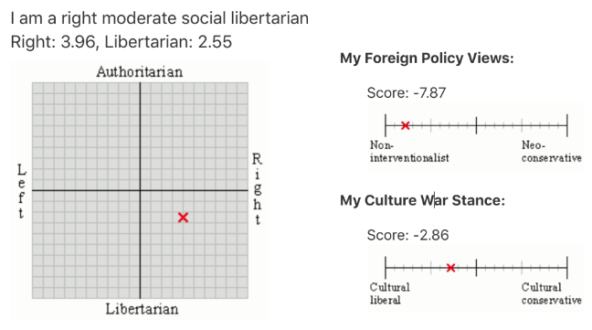 Does this mean I’m softening in my old age (76)? I’m pretty sure I’ve heard that as one grows older, one’s positions tend to harden. Perhaps it just means I’m pulling farther away from the Republican stances I grew up with (I switched to the Dems in 2000 when the GOP nominated George W. Bush, then became an unaffiliated voter in 2006). Or, as I’ve always contended, the Republicans grew away from me. Far, far away.

Frankly, I think both parties need to move back toward the center, at least far enough to reach across the aisle again.

(I just noticed that although the pretty colors are a nice addition to the charts, they ought to put the red on the right and the blue on the left … just sayin’)